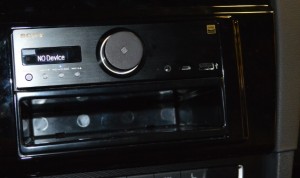 Sony showed for the first time a working prototype of the first Hi-Res Audio deck for the car along with a pair of super tweeters that can reproduce sound above 22 kHz.

The deck is expected to ship at the end of the year, with more news on the product to be revealed next month, said Sony Director of Mobile & Headphones, Personal Imaging and Audio Division Takumi Sasaki at KnowledgeFest this weekend.

The picture here does not do justice to the high style full aluminum machined finish on the unit with bright white LED lighting.

The mechless unit can stream music from an iPhone or Android phone and has an NFC tap-to-pair feature.

It will play back audio on a USB drive in FLAC 192kHz/24bit without down converting the signal.   And it shows a readout of the frequency and bit depth of the music playing. It works with a pair of Sony audiophile super tweeters and was shown with a Hi-Res Audio amplifier (70 watts x 4).

The deck requires a Lightning to USB female adapter cable for an iPhone or an Android OTG cable plus a USB A to USB Micro B cable.   It has an optical output and works with Bluetooth EDR.

A non-working prototype of the Sony Hi-Res Audio player for the car was first shown at CES in January. 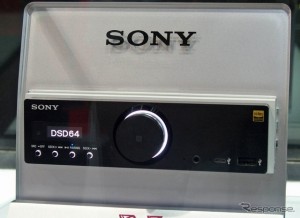